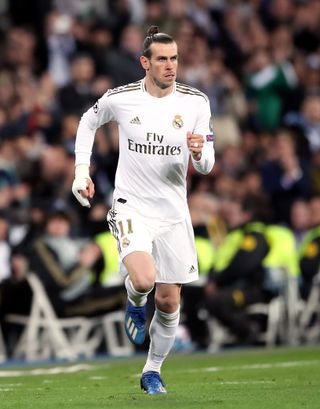 Wales international Bale has fallen out of favour at the Bernabeu and featured little in the new Spanish champions’ title-winning run-in.

The 31-year-old’s omission from Real’s travelling party for the last-16 second leg at the Etihad Stadium this week further fuelled speculation over his future, but Zidane says that was the player’s own choice.

Speaking at a press conference, Zidane said: “It was a personal conversation I had with him. He preferred not to play. The rest remains between me and him but he said he didn’t want to play.”

Zidane was pressed further on the matter but refused to elaborate.

“I answered before to explain the situation and I don’t want to add anything else,” he said. “The rest is a private conversation between player and coach. There is nothing else to add.”

Bale, who has won the Champions League four times since joining Real in an £85.3million deal in 2013, has played just twice since the season resumed following the Covid-19 stoppage.

He courted controversy by pretending to fall asleep as an unused substitute for a game against Alaves and was not in the squad for their final LaLiga match at Leganes.

Although he was heavily linked with a move to China last year, his wages are thought to be a large stumbling block to any potential move and he is contracted at the Bernabeu until 2022.

Asked if Bale had a future at Real, Zidane said: “I don’t know. Now he is a current player at Real Madrid. That has not changed. He is our player. I respect that and I respect him, like everyone else.

“He preferred not to play. That is the only thing I can tell you. The rest of us are all here, preparing for the game. The only thing we are concentrating on is the game.”

Real could have former Chelsea playmaker Eden Hazard in their side as they seek to overturn a 2-1 deficit against City.

The Belgian has endured an injury-hit first season with Real and also missed the Leganes game to rest his ankle.

Zidane said: “It is true he was feeling it a bit towards the end of the (LaLiga) season but now he is much better than he was. We have had a lot of time to prepare for this game and I think he is OK and full of confidence.”

Real will be without captain Sergio Ramos after his sending-off in the latter stages of the first leg in February but Zidane feels his side are well prepared.

He said: “We are in good shape. We prepare ourselves to play this type of game and we have known for a long time what we have to do.

“We know we are behind in the tie but we are focused and this is another final for us. It is a knockout stage game and we are going to try to put in a great performance.”