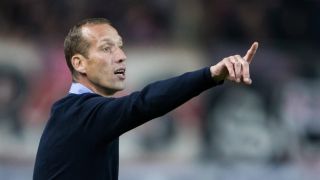 The 2. Bundesliga match between Kaiserslautern and Darmstadt was abandoned on Wednesday after a half-time "medical emergency" involving the away team's coach Jeff Strasser.

The teams did not emerge for the second half and the abandonment of the match was confirmed with the score at 0-0.

Darmstadt said a medical emergency was behind the lengthy delay, with Kaiserslautern then revealing coach Strasser was being taken to hospital.

"Dear FCK fans, as you have probably already noticed, the away game in Darmstadt is cancelled," a Kaiserslautern statement said.

"Reason is a medical incident. Our head coach Jeff Strasser is on the way to the hospital."

In a message of support to Strasser, Darmstadt posted on Twitter: "As much we love football, there are so many more important things in life."