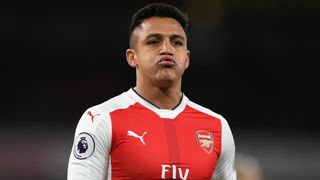 Ryan Giggs has urged Manchester United to make a move for Arsenal attacker Alexis Sanchez ahead of the 2017-18 Premier League season.

The Chile international's future at Emirates Stadium is in doubt after contract talks were put on hold earlier this campaign, with his existing deal due to expire in June 2018.

Manchester City and Chelsea have since been credited with an interest in signing the 28-year-old, but Giggs feels he would be an ideal suit for United.

"Sanchez is a brilliant player," Giggs told The Express.

"His work rate, the effect he has on his team-mates, a winner. He just looks how South Americans are, tough aren't they.

"Jose Mourinho bought [Zlatan] Ibrahimovic because he is a winner.

"He had won everywhere he'd gone. Not only the effect on the pitch but off the pitch as well.

"You can just feel that Sanchez would give his team-mates a lift as well."

Sanchez has netted 26 goals in 48 appearances in all competitions this term.