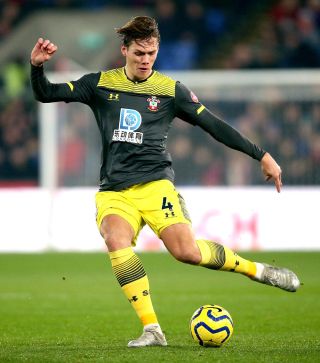 Southampton manager Ralph Hasenhuttl has dismissed speculation linking Jannik Vestergaard and Che Adams with January transfers and insists he is not interested in selling players.

Defender Vestergaard has reportedly emerged as a surprise target for Premier League rivals Leicester, while striker Adams is rumoured to be interesting Championship club Leeds.

Both players have been peripheral figures at St Mary’s this season but Hasenhuttl says neither has expressed a desire to leave.

The Austrian coach, whose side host Tottenham in the FA Cup fourth round on Saturday, is eager to keep together a resurgent team which has won seven of their last 11 top-flight fixtures to move clear of relegation danger.

“I’ve recognised it now that our players are interesting for other clubs, that shows that we do a good job here because they want to have him (Adams),” said Hasenhuttl.

“He’s not playing in the moment all that much but I think he feels how important he is for this team.

“Nobody was is in my office and wanted to leave us. Also, we don’t have to sell any players. We need every player in the moment, the squad has good balance.

“We have a fantastic atmosphere, all the success we had in the last weeks was not based on one or two or the first XI, this was based on 20 players, they are going in the same direction and I don’t see any reason why I should change this.”

Adams has failed to register a goal in 18 top-flight appearances since arriving from Birmingham last summer for a reported £15million.

The 23-year-old has struggled for starts in recent weeks and fallen behind top scorer Danny Ings, Shane Long and Michael Obafemi in the pecking order.

Centre-back Vestergaard made his first top-flight start in more than 10 weeks during the midweek victory at Crystal Palace.

However, the 27-year-old Dane will be absent for the visit of Spurs due to a concussion suffered at Selhurst Park.

Hasenhuttl’s options have been further reduced by injuries suffered by full-back Cedric Soares and forward Long, justifying his wish to retain players.

“Cedric (is) out for three weeks maybe with a ligament injury in his knee and Jannik is also out because he has a concussion with the elbow he hit,” said Hasenhuttl.

“Longy has a swollen knee, so also is not able to play on the weekend, so we have three automatic changes for the XI.”

Hasenhuttl remains intent on reinforcing his squad before the transfer window closes.

Recruiting a full-back was the 52-year-old’s priority before Portugal international Soares joined Yan Valery on the treatment table.

The former RB Leipzig coach is keen to avoid short-term options and refused to be drawn on a potential move for Tottenham defender Kyle Walker-Peters.

“We have spoken about alternatives in the full-back positions and we don’t have that much,” said Hasenhuttl.

“Walker-Peters is a player who is playing in this position, but I don’t want to speak about the rumours.

“We have a few players in our mind but in the winter break it’s not that easy to get somebody.

“If we want to bring somebody in, then they have to be an option for the future. If it’s only a loan, it doesn’t make much sense to me because they will have to learn how we play.”