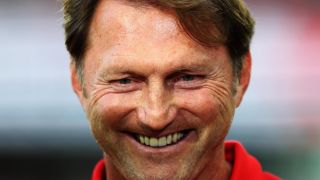 RB Leipzig coach Ralph Hasenhuttl said he had given no thought to possibly taking over at Bayern Munich.

The Bundesliga champions sacked Carlo Ancelotti as coach on Thursday, with Willy Sagnol in charge on an interim basis.

Hasenhuttl took over at RB Leipzig last year and led the club to second in the league.

But quizzed about the Bayern job on Friday, the Austrian said he had never considered it.

"Never thought about it, not one second, zero," Hasenhuttl said when asked if he could join Bayern.

RB Leipzig are sixth in the table ahead of visiting Cologne on Sunday.