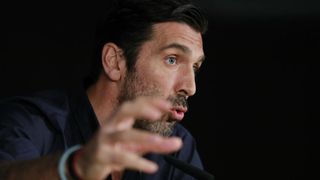 Gianluigi Buffon has warned his Juventus team-mates that final defeat to AC Milan is tough to swallow ahead of Wednesday's Coppa Italia showpiece.

Buffon's fantastically decorated career is without a Champions League winners' medal, with losses to Barcelona and Real Madrid in two of the past three finals bitter pills for the goalkeeping great to swallow.

But arguably his most acute instance of heartache came at Old Trafford in 2003, when Milan triumphed on penalties after a drab final ended goalless.

Following a gripping battle with Napoli, Juve are on the verge of retaining their Serie A title for a seventh consecutive season and Buffon insists this is no time to slack off.

"It has been a tough, long year and certainly an emotional one," Buffon told a pre-match news conference. "We've rediscovered our focus and we're now confident of achieving our goals.

"Against Milan you can never be classed as favourite. I began to understand that from 2003 in Manchester and the finals in which we've met since then have proved that matters are normally not settled within the 90 minutes.

"In cup finals, fatigue does not exist. We are in the same boat as Milan and we won't be looking for excuses.

"Juve's main strength is the ability to deliver heavy blows to their opponents even when it looks like all is lost."

The match pits Buffon against the youngster widely considered to be his heir in the Italy national team and the 40-year-old holds Gianluigi Donnarumma in high regard.

"Donnarumma will be Italy's number one goalkeeper for the coming years, I'm sure about that," he said.

"Many other excellent Italian keepers are emerging at the moment. As a nation, we are doing well in that department."