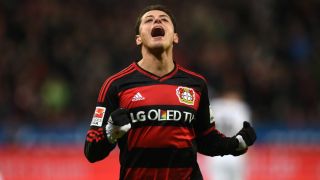 Mexico coach Juan Carlos Osorio feels Javier Hernandez's form for Bayer Leverkusen proves he made the right decision to leave Manchester United at the start of the campaign.

The striker opted to leave Old Trafford for the Bundesliga after he was deemed surplus to requirements by manager Louis van Gaal and has since developed into a key figure at the BayArena.

Hernandez has already netted 11 goals in 14 Bundesliga outings and Osorio is delighted to see the attacker back to his best.

"Joining Leverkusen was a very good decision," Osorio told Bild. "He again showed that he is capable of making the right calls. The club, the team, the fans, they are all enjoying his quality."

Osorio believed Hernandez always had the quality to succeed as he as at Leverkusen.

"I already knew that he had the quality to become a great striker when he was at Manchester United and Real Madrid," he said. "There are a few real strikers out there who can score great goals and he is among the world's best. He is a real predator in front of goal.

"He already showed his potential when he just moved to Europe and he is now showing what he can really do."

He added: "It is not easy for any striker to have such a good goal-to-games ratio. I never doubted him, but you always have to show it in such a strong league. It is fantastic. I hope he can keep this up."