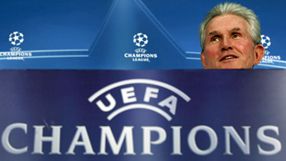 Bayern defender Philipp Lahm was also keen to emphasise that Bayern had respect for the La Liga leaders including their controversial Portuguese forward Cristiano Ronaldo.

Bayern host Real on Tuesday in the first leg of their Champions League semi-final, the first meeting between the sides for five years. Past matches have featured a variety of mud-slinging, tantrums and violence, something which Heynckes - himself a former Real Madrid coach - was keen to play down.

"Football has changed since those days," he told reporters adding that dirty tricks had become less common as everything was captured on video.

"These days, there are so many cameras on the match... I don't have the feeling that the teams will go for it in a way that goes beyond the limits.

"In any case, we have a referee who will be there to control all of this."

Bayern's former president and captain Franz Beckenbauer once described Real coach Jose Mourinho as "rude and with no education", but Heynckes refused to go down that road either.

"I have followed Mourinho's career, he is a manager who has made a mark wherever he has been, he has been hugely successful," said Heynckes.

"He succeeded me at Benfica [in 2000], although he was only there for five months.

"He has put his mark on the team and I would not say he is a defensive manager. You have to be balanced as a team in modern football, he is breaking all the goalscoring records. I would say he is one of the best managers in Europe."

Heynckes previously coached Bayern in a quarter-final against Real Madrid in 1988, when the Bavarians raced to a 3-0 lead at home but conceded two late goals to win 3-2, then lost the away leg 2-0 to go out 4-3 on aggregate.

Ten years later, he was coach of Real when they ended their 32-year wait for a sixth European Cup title. He said he continues to follow Real closely.

"I know them well, I know how they play, I know their players, their reserve team players," he said. "They score a lot of goals, they have great individual players but we have that as well."

"You have to have a lot of respect for a player like him," he said. "I know how hard he has worked to get where he is, top players are all talented but you must have discipline and hard work to get to this level."

Lahm said Bayern, who have seen their chances of winning the Bundesliga evaporate in the last week, would get over the disappointment.

"We're not thinking about that," he said. "We will be runners-up in the Bundesliga, but we're in the final of the German Cup and we still have the possibility to win titles. Not everyone gets to play a semi-final against Real Madrid.

"We reached the Champions League final two seasons ago and the semi-finals this year so we must be doing something right."