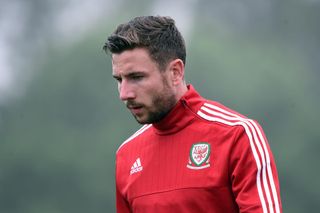 Paul Dummett has called time on his Wales career after manager Ryan Giggs revealed the Newcastle defender made himself unavailable for international duty.

Dummett has won only five caps in a stop-start international career, but Giggs admitted the 27-year-old was in contention to play in next month’s vital Euro 2020 qualifier against Azerbaijan.

Giggs, who has concerns in central defence and left skipper Ashley Williams out of his 26-man squad as the veteran is currently without a club, suggested Dummett’s Wales career was now over.

“I think that will be it,” Giggs said at his squad announcement press conference for the Azerbaijan game in Cardiff on September 6.

“I spoke to Paul and he just really wanted to concentrate on club football.

“He felt he’s had a lot of hamstring problems.

“He’s had hamstring problems earlier this season and just felt he wanted to make sure he was fit for Newcastle.”

But the Newcastle-born defender has a long history of hamstring problems and failed to make his mark on the international stage.

Dummett won his first cap against Holland in June 2014, but fell out with previous Wales manager Chris Coleman and made himself unavailable for selection in May 2017.

He returned to the Wales set-up under Giggs in January 2018 and made his final competitive appearance in the Nations League defeat to Denmark the following November.

Dummett’s fifth cap came in the Wrexham friendly victory over Trinidad and Tobago in March.

“He wants to concentrate on club football so I’ve got to respect that,” Giggs said.

“I’m not fussed about that. He’s playing in the Premier League, he’s a good defender, but I’ve got options.”

Williams, however, is not one of them for the time being after failing to find a club since his summer release from Everton.

The 86-times capped Williams – the third most capped player in Welsh football history – could complete a move to Bristol City this week but, for now, Chris Mepham, Ethan Ampadu, James Lawrence, Tom Lockyer and Joe Rodon remain his centre-back options.

“Ash is yet to find a club,” Giggs said. “I think he’s more or less signed for Bristol City, I know he’s in talks with them, but he’s not done a pre-season.

“I spoke with Ash and he was fine about it. He hasn’t let me down and it wasn’t an easy decision.

“But we have players who are playing, especially in his position. He still remains my captain.”

Gareth Bale, now back in favour at Real Madrid after an aborted move to the Chinese Super League, will captain Wales next month.

Wales are six points adrift of Group E leaders Hungary, albeit with a game in hand, and three behind Croatia and Slovakia.