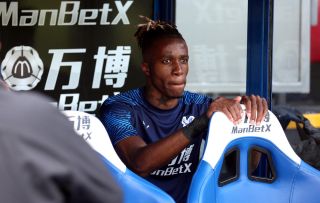 Roy Hodgson praised the Crystal Palace fans for backing Wilfried Zaha during their opening-day draw with Everton despite the winger angling for a summer move away from Selhurst Park.

Zaha was a target for the Toffees, as well as Arsenal, during the transfer window and handed in a transfer request in the hopes of landing a move away from Palace.

Instead deadline day passed and Zaha remained at the club, coming off the bench during the goalless draw with 10-man Everton.

Morgan Schneiderlin was sent off for the visitors for two second-half bookings, with Everton creating the better chances to settle the game.

Zaha was only named on the bench having recently returned to training following his involvement at the Africa Cup of Nations and with the spotlight firmly fixed on him after his potential exit.

But his name rang around the stands on several occasions before he was introduced with 25 minutes remaining.

“He handled it very well but the crowd helped didn’t they? It was such a great reception,” Hodgson said.

“It was nice to have him available to give another dimension to our play. The two front players who started were exceptional but it was good to have him to bring on.

“I only saw him on Friday because I sent him on Thursday. But he was fine on Friday. He was excellent this morning, no problem at all as you can tell by watching the game.

“That situation has been and gone and Wilf will make certain he brings his straw to the water and helps us have a good season, just like he has done in the previous two seasons.”

Meanwhile, Everton boss Marco Silva felt an ankle injury to midfielder Andre Gomes may have been the moment his side lost their early dominance as his replacement – 23-year-old debutant Jean-Philippe Gbamin unable to fill the void.

“It was a competitive game, a tough game like we expected when you come to play here,” he said.

“It was a very good first half for our team, we created enough chances to score more than once, it started in the first minute with Gylfi Sigurdsson and during that period we created clear chances with Seamus Coleman and Dominic (Calvert-Lewin) also.

“In the first half we were clearly the best team on the pitch, during that period was the key moment in the game in my opinion, was the injury to Andre Gomes.

“Until that moment we were solid and playing well and creating chances and then of course when I change and bring in Jean-Philippe Gbamin he had some problems.

“It is normal and you need to adapt when you sign new players and young players come to a new competition.

“It is always a problem and it was a key for us because we started losing easy balls during the second half and it was then when they created two chances to score from counter-attacks.”