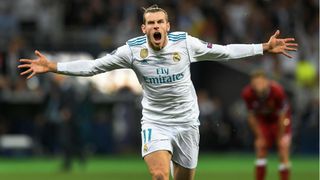 Gareth Bale appeared to agree with the suggestion he is underappreciated as a player after scoring twice in Real Madrid’s 3-1 Champions League final victory over Liverpool.

Bale was left out of Zinedine Zidane’s starting XI for the match in Kiev, only to come off the bench with the game tied at 1-1 and clinch a third consecutive European title for his side.

His first – a perfectly executed bicycle kick – will go down as one of the greatest goals in Champions League final history, while his second from distance was helped by the indecision of goalkeeper Loris Karius, who had also been at fault for Karim Benzema's opener.

Cristiano Ronaldo stole some of the headlines with his surprise indication that he could leave Madrid before next season, but Bale also spent a significant portion of his post-match media duties discussing his own future.

The Wales international said repeatedly he feels he should be starting every game and, if that is not guaranteed, will sit down with his agent to discuss his options.

And it was put to Bale that he has not been given the credit he deserves during a five-year stay in Madrid that has seen him win the Champions League on four occasions, as well as LaLiga in 2016-17.

After pausing briefly to consider his response, Bale did not disagree with the statement.

"It doesn't bother me whether or not [I do], to be honest," he replied. "I know what I do, what I'm capable of and what I've achieved."

Now 28, and after being hampered by injuries in recent seasons, Bale knows the career of a professional footballer is too short for someone of his quality to spend prolonged periods out of the first team.

And the ex-Tottenham man, who has been linked with Bayern Munich and Manchester United, believes he can get even better after putting his fitness issues behind him.

"I got over my ankle injury around Christmas. It took a good year after surgery to fully recover," he added.

"I feel that there is a lot more to give from me. That's why I feel I should be playing week in, week out and that’s what I need to be doing."