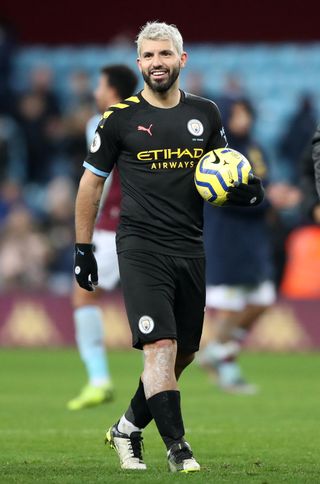 Sergio Aguero was thrilled to have secured a twin entry into the Premier League history books with his hat-trick against Aston Villa, but remains hungry for even more goals.

The Argentina striker overtook Frenchman Thierry Henry as the Premier League’s leading overseas scorer after taking his tally to 177 goals in 255 matches during Manchester City’s 6-1 mauling of Villa.

Aguero also now boasts the most hat-tricks in the competition’s 18-year history, with his 12th treble seeing him move past Alan Shearer.

I'd like to thank all of those who've made this possible. My teammates, the whole @ManCity, our supporters, the @premierleague, my family and all of those who help me be better every day. And a special dedication to my son Benjamin ⚽️⚽️⚽️— Sergio Kun Aguero (@aguerosergiokun) January 12, 2020

The prolific South American hitman, who joined City from Atletico Madrid in 2011, told Sky Sports after the match: “I’m so happy for the record.

“But I thank my team-mates because they helped me this year. I’m so happy.”

He is now joint fourth after moving above former Arsenal star Henry and joining Frank Lampard on 177 strikes.

Aguero added: “I want to keep scoring more goals, but it all depends on my team-mates. If they pass to me, then it’s fine.”

The 31-year-old, who was hailed a “legend” by many of his team-mates, dedicated his feats to his son Benjamin.

He said on Twitter: “Very very happy about this victory, and it’s truly moving to reach new milestones — standing alongside legends like @ThierryHenry, Frank Lampard and @alanshearer.

“I’d like to thank all of those who’ve made this possible. My teammates, the whole @ManCity, our supporters, the @premierleague, my family and all of those who help me be better every day. And a special dedication to my son Benjamin.”