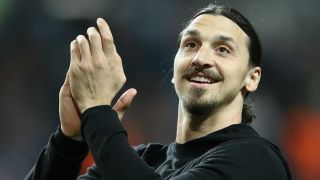 Sweden head coach Janne Andersson insists Zlatan Ibrahimovic has not had any influence on the team's preparations for their World Cup opener with South Korea.

LA Galaxy striker Ibrahimovic retired from international football after Euro 2016, but hinted at a possible return for this year's finals in Russia during what proved to be a protracted commercial campaign.

Andersson says the 36-year-old is now firmly out of the picture when it comes to Sweden's plans and has not had any involvement at any stage of the build-up to Monday's match in Nizhny Novgorod.

He told a news conference: "I became the head coach almost exactly two years ago, after the Euros, and Zlatan Ibrahimovic, together with a number of others, chose to announce they were leaving the national team.

"I respected that and that was the end point of his extraordinary career for Sweden. He hasn't had any involvement whatsoever with the team since.

"There's no link between him and the team, nor with any other players who have left."

A peculiar spying row has emerged ahead of the match, which will be Sweden's first at a World Cup since their round-of-16 defeat to Germany in 2006.

It was suggested Sweden's main training ground in Gelendzhik made it too easy for rivals to watch their sessions, while there were accusations that scout Lars Jacobsson rented a house to make it easy to monitor South Korea's pre-tournament camp in Austria.

However, Andersson says the truth of the alleged 'spying' is more mundane.

"He heard about a practice session, he didn't understand it was a closed session, he was asked to leave and he watched from a distance," he said.

"It's very important we show respect to our opponents. If it has been perceived another way, we apologise. You're making a mountain out of a molehill.

"Hidden tricks are only hidden if they stay hidden. I have nothing I'm hiding. As to the Korean head coach and his tricks, it's entirely up to him."

Andersson also clarified the work done by the team's "sports counsellor", who has been working with the players on their mental fortitude.

"I worked with him at my former team and he became a natural part of the team," he explained. "There's nothing strange about mental coaching.

"He's very, very good at what he does and he is an important part of our team."