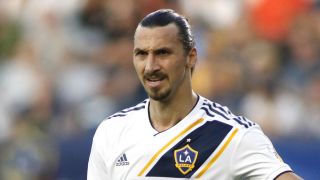 Zlatan Ibrahimovic has withdrawn from a meeting against former club Juventus in the MLS All-Stars match.

The LA Galaxy star was set to top the bill against the Serie A champions at Mercedes-Benz Stadium in Atlanta.

But the former Sweden striker has pulled out of Wednesday's match due to Galaxy's recent busy schedule.

"I am disappointed to miss the 2018 All-Star game against Juventus, one of my former clubs," said Ibrahimovic, who played for the Bianconeri between 2004 and 2006..

"I want to thank the fans for voting me to the team. My main focus is to score goals and help the LA Galaxy to the play-offs."

Due to MLS rules Ibrahimovic will have to sit out Galaxy's next fixture, away to Colorado Rapids on Saturday, after skipping the All-Stars clash.

Ibrahimovic hit his first MLS hat-trick as Galaxy came from behind to beat Orlando City 4-3 on Sunday, taking his tally for the club to 15 goals in 17 league appearances.