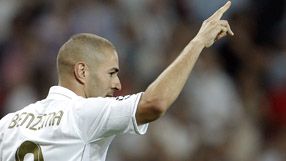 Real Madrid striker Karim Benzema has damaged a muscle in his left leg, the club said on their website on Friday.

There was no hint of how long Benzema, who has been included in France's squad for next month's Euro 2012 qualifiers, might be sidelined but he is unlikely to feature at Espanyol on Sunday.

Real are fifth in the table with 10 points from five games.

Barcelona were given a boost ahead of Sunday's game at struggling Sporting Gijon when midfielder Andres Iniesta was able to train with his team-mates on Friday for the first time since tearing a leg muscle two weeks ago.

Iniesta is unlikely to be fit for Sunday while captain Carles Puyol trained apart from the rest of the squad after picking up a knock in Wednesday's 5-0 Champions League win at BATE Borisov.

Barca are second on 11 points having drawn their last two away games at Real Sociedad and Valencia respectively. Promoted Real Betis, who host Levante on Sunday, are the surprise leaders with 12 points.

Barca ground out a 1-0 win at Gijon's Molinon stadium two years ago and were held to a 1-1 draw there last season and full-back Adriano has warned his team-mates against taking Sunday's game lightly.

"Last year we suffered and two years ago we had to make a big effort to win," the Brazilian said at a news conference on Friday.

Barca are an even better team than the one that won a Spanish league and Champions League double last season following the purchase of midfielder Cesc Fabregas and forward Alexis Sanchez, according to Gijon coach Manuel Preciado.

"The stars will have to be aligned for us to win," he told a news conference on Friday. "We'll have to do everything right and [Lionel] Messi and company will have to have an off-day."

Sevilla striker Alvaro Negredo has a muscle problem and is doubtful for the fourth-placed team's visit to Atletico Madrid on Sunday.

"If Alvaro can play so much the better," coach Marcelino told a news conference on Friday. "If not, with the players we have available we have sufficient potential to beat Atletico."

There is a lot at stake for Atletico when they host Sevilla, as the Andalusian club has similar objectives for the season, according to the Madrid side's centre-back Alvaro Dominguez.

"We are treating the Sevilla game as a sort of mini final because we want to be up there [in the table] and Sevilla is a team that has the same goals as us," the Spain Under-21 international said at a news conference.

Athletic Bilbao are still looking for their first win since the arrival of new coach Marcelo Bielsa and are second from bottom ahead of their game at Basque rivals Real Sociedad on Sunday.

However, Thursday's 2-0 Europa League victory at home to Paris Saint-Germain should give the team a lift, according to midfielder Igor Gabilondo.

"It was important to play a good match... for the team and the fans," Gabilondo told reporters. "The team came into the match playing well and improving but we were just lacking a good r