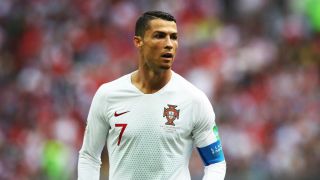 Portugal head coach Fernando Santos said his side's third World Cup group game was not a case of Cristiano Ronaldo versus Iran as he warned his players of the tough contest awaiting them.

Ronaldo has scored all four of Portugal's Group B goals so far, netting a hat-trick in the 3-3 draw with Spain before getting the winner in a 1-0 victory over Morocco.

Despite the Real Madrid striker's excellent form, Santos rejected the suggestion that the responsibility would be on Ronaldo to deliver a result against Carlos Queiroz's side.

The 63-year-old spoke of his close friendship with Queiroz, whose side are one point behind Portugal in the Group B standings after a win over Morocco and a defeat to Spain, both by a 1-0 scoreline.

Santos said he had been impressed by the former Real Madrid and Portugal coach's progress with Iran since his appointment in 2011.

"He has been my colleague and friend for 35 years," said Santos. "We travelled many times by train and we talked a lot of football because he taught at the time and I was an engineer. He will do his best to win for Iran, I am sure.

"I had the opportunity to see these two Iran games in the World Cup and the 10 that they played in qualifying. I soon felt certain that they are a very strong team: nine wins, one draw, conceding only two goals with Syria when they qualified.

"There are experienced players with a strong strategy. We have seen here Iran's defensive organisation and not only because they know how to play well and play ball.

"There will be two teams that fight a lot, that will give everything.

"I want to win, my colleague wants to win and it's going to be a tough and strong battle. We have to be prepared."