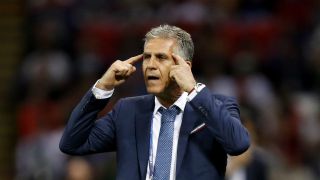 Iran coach Carlos Queiroz is not getting carried away about his side being 2019 Asian Cup favourites, because of the number of shocks witnessed at last year's World Cup.

Ahead of their tournament opener against Yemen on Monday, Iran's position of 29th in FIFA's world rankings is the highest of all the nations in the competition, with Australia 12 places behind and Japan further back in 50th.

As such, Iran have been backed to go all the way as they aim to win the competition for the first time since 1976, when they claimed a third successive triumph in the Asian Cup.

However, Queiroz pointed out that few of the pre-tournament favourites at the World Cup in Russia last year lived up to expectations, with Brazil, Argentina, Spain, Portugal and Germany all failing to get beyond the quarter-finals – the latter even finishing bottom of their group as defending champions.

Queiroz accepts the heat is on for Iran, but he has at least attempted to ease some of the pressure.

"I know we are in a good position when we talk about the [FIFA] rankings," Queiroz told reporters. "But, tell me one thing; how many teams from the top five, as per the rankings, reached the World Cup final in Russia?

"What counts is what you're able to do on the day, on the pitch. We are in the final phase of our preparations. We are in the taxiway and moving toward the runway. We want to ensure that everything is fresh and ready when we take off on Monday.

"The team is completely focusing on the first game against Yemen. Right now, that's all that matters for us.

"We must be ready in our journey to face some wonderful moments and also moments that won't be that easy. We need to be mentally tough here."

By contrast to Iran, Yemen are the lowest-ranked nation at the 2019 Asian Cup at 135th and are playing in the tournament for the first time ever.

Their historic qualification for the competition comes amid war in the country, but Milos Brozek – assistant to head coach Jan Kocian – says they do their best to keep their focus on the football.

"We have players from all over Yemen," Brozek told Reuters. "Sometimes we talk with the players about the conflict, but we keep the focus on football.

"We have had big support from Yemeni supporters around the Gulf and we see how the people support the players.

"Sometimes if you are somewhere for the first time you don't really realise just how big it is. We will show our best without any problems with nerves."

Rubin Kazan striker Azmoun is generally regarded as Iran's biggest talent. He struggled at the World Cup and briefly retired from international football due to the criticism he received, saying the flak made his mother ill. But he returned in October and will surely be desperate to hush his doubters.

It is fair to say Yemen are not expected to make much of an impact in this tournament. If they do, it is likely Al-Sasi will have had something to do with it. He does not get much game time in Qatar with Al Sailiya, but he is Yemen's experienced captain and focal point in attack.

- This will be the first encounter at the Asian Cup between Iran and Yemen.
- Iran are making their 14th consecutive appearance at the Asian Cup, a run which started in 1968. It is the longest run of participations at the tournament.
- Iran won the Asian Cup in their first three participations (1968, 1972, 1976). Since then, they have never reached the final in their subsequent 10 appearances, getting knocked out at the quarter-final stage in the last three editions.
- Iran have lost only one of their last 18 games at the Asian Cup, penalty shootouts excluded (W11 D6).
- Yemen are one of three teams making their Asian Cup debut this year, along with Kyrgyzstan and Philippines. Australia were the last team to reach the knockout stages of the competition on their first appearance (2007).