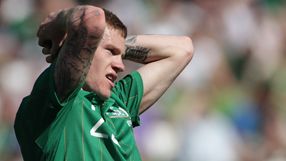 Trapattoni told a news conference that Sunderland winger McClean, who has a hip strain, may also miss the away game against the Faroe Islands game on October 16.

St Ledger and Whelan, who like McClean (pictured) were part of Ireland's Euro 2012 squad, underwent scans on Monday and have been ruled out of both matches, the Football Association of Ireland (FAI) said in a statement.

Aston Villa utility player Ciaran Clark has been called into the squad.