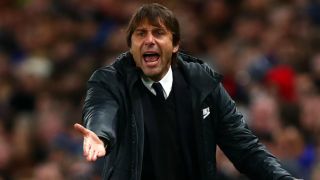 Antonio Conte said he does not aim high with his transfer requests as he has "rarely been given the players I asked for" after the Chelsea boss was questioned about his January plans.

Chelsea played out an entertaining 2-2 draw at London rivals Arsenal in the Premier League on Wednesday but the attention soon turned to the transfer window and possible signings.

Reigning champions Chelsea have been linked with Bayern Munich midfielder Arturo Vidal as Conte looks to reunite with the former Juventus star, while Monaco's Thomas Lemar has also been mentioned.

However, Conte said via Sky Sport Italia: "I do not aim high with my requests, especially as in my history I've rarely been given the players I asked for.

"I always ended up at clubs who were running an austerity programme.

"I just try to do my work. If someone arrives, good, if they don't, then that's fine too. I have to continue my work, either way."

Chelsea are third in the Premier League, a point adrift of Manchester United and 16 behind runaway leaders Manchester City after 22 rounds.