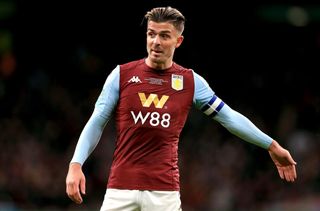 An investigation has been launched after pictures surfaced online appearing to show Aston Villa captain Jack Grealish following an incident in which a Range Rover crashed into parked cars.

West Midlands Police said they were called just before 10am on Sunday to the Dickens Heath area of Solihull, where the two parked cars suffered minor damage.

The force said the driver left his details with a member of the public before leaving on foot.

Images surfaced online on Sunday of a damaged white Range Rover as well as a picture that appeared to show the Villa midfielder in slippers and a bright blue hoodie.

Less than 24 hours before the incident, the 24-year-old launched a video appeal for people to stay at home during the Government-enforced lockdown.

In the video, he said: “To help save lives you must stay at home.

“Only leave your house to buy food, buy medicine or to exercise and always remember to stay at least two metres apart.

“This is urgent, protect the NHS, stay home, save lives.”

In a statement about the incident, the West Midlands force said: “We were called to Waterside, Dickens Heath, just before 10am to reports that a Range Rover had crashed into two parked cars in the street.

“The driver left his details with a member of the public at the scene before leaving on foot, and will be spoken to by police in due course.

“Minor damage was caused to the parked vehicles.

“Officers are investigating the circumstances and anyone with information has been asked to get in touch, via Live Chat at west-midlands.police.uk quoting log 643 of 29 March.”