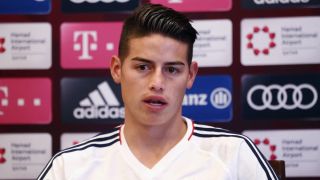 Real Madrid outcast James Rodriguez wants to remain at Bayern Munich despite an inconsistent start to life at Allianz Arena.

The Colombia international joined the Bundesliga champions on a two-year loan deal from Madrid, with the option for the German club to make the move permanent.

The 26-year-old struggled to settle early this season, as Bayern's poor form cost Carlo Ancelotti his job as head coach.

James has found himself in the starting XI with more regularity under Ancelotti's replacement Jupp Heynckes, though, and the playmaker hopes to remain in Bavaria.

"I'll stay here… I am very happy in Munich," he was quoted as saying by Kicker.

"I don't want to think about something else."

Speaking at a news conference on Thursday, he said: "I have a very good feeling in the team. I hope things also go well in the second half of the season because I still want to achieve a lot with this team.

"Jupp Heynckes is a top coach – second to none in the world. We speak a lot and it obviously helps me that he speaks Spanish.

"I slowly found my rhythm. It helped that I got so much playing time.

"I like the Bundesliga stadiums a lot; they are always full. You also play against very good teams. It's a top league."

: "I have a very good feeling in the team. I hope things also go well in the second half of the season because I still want to achieve a lot with this team." January 4, 2018

The runaway league leaders have strengthened their squad by signing experienced striker Sandro Wagner, a product of the Bayern youth system, from Hoffenheim.

And Thomas Muller, a fellow academy graduate, has welcomed the capture.

"Sandro Wagner gives us another option," he said.

"He is confident, is focused in training and is very committed."

Muller was among those players rumoured to be unhappy with Ancelotti's methods, but the Germany international offered a glowing endorsement of life under Heynckes, as Bayern enjoy a training camp in the warmth of Doha.

"The conditions here are, as ever, top," he said.

"Because the winter break is so short, there's even more focus on the training sessions.

"In the last few weeks we have fought for each other – that's how we won tight games. Now we want to make the next step in footballing terms."