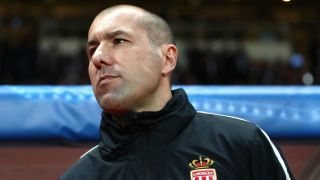 After winning the Ligue 1 title, Leonardo Jardim has told his players to enjoy their match against Rennes, but the Monaco coach is already braced for a struggle to keep his prized assets.

The club from the principality have enjoyed a successful campaign under the Portuguese, breaking Paris Saint-Germain's stranglehold on the domestic crown and progressing to the semi-finals of the Champions League, bowing out at the hands of Juventus.

It remains to be seen if Monaco can keep hold of the emerging stars that powered their title success, with teenage striker Kylian Mbappe likely to attract attention from across Europe, although the coach appears willing to accept inevitable changes to the squad at his disposal.

"We will take stock next week, as the leaders do every year," Jardim said of the club's plans for next season.

"There is a strong relationship with my players. I love this group.

"The day I train [just] one squad, I will not be working for a club. So it's not for now.

"The important thing is the passion and ambition in your work. Play to win and do it right."

The final game of the season, away to Rennes on Saturday, now serves as an opportunity for the players to reflect on their achievement.

"The result is there," Jardim said.

"We won the championship! For this last game I don't set objectives.

"The [targets] of points, of goals, are already acquired. It's a game to enjoy.

"It's an exhibition game tomorrow. There is no pressure for the result."

As for the team likely to take to the field at Roazhon Park, the coach - in a justifiably jovial mood - chose to keep a least one secret from the media.

"The selection? I could give it to you, but I don't yet know - we will see after training," he said with a smile.