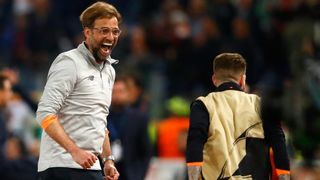 Liverpool's spot in the Champions League final has come as a complete surprise to former midfielder Craig Johnston, who is "amazed" as the Reds attempt to dethrone Real Madrid.

Jurgen Klopp's high-flying Liverpool will go head-to-head with two-time reigning champions Madrid in Kiev on Saturday, the Anfield side looking to top the European summit for the first time since the 'Miracle of Istanbul' in 2005.

Liverpool finished fourth in the Premier League this season but have dazzled in Europe – unbeaten until their semi-final second-leg defeat to Roma as they earned a showdown against the Spanish giants, having crushed Manchester City en route to the showpiece.

Klopp, who is yet to win silverware since replacing Brendan Rodgers in 2015, has been on a long-term mission to establish Liverpool among the English and European elite but Johnston has been caught off guard by the club's run to the final.

Johnston – a five-time league winner and European Cup and FA Cup champion during Liverpool's dominance in the 1980s – told Omnisport: "I am surprised because it's been such a long time. You look at the list of the people they beat along the way, and how they beat them and the amount of goals they scored.

"I think there were five goals for each match. The answer is yeah, I was like: 'wow! where did this come from?' I think it came from the good form that Liverpool do show in the league from time to time. But living on a knife-edge, like the Roma replay, it just makes such exciting stuff. Probably if you're not a Liverpool fan. If you are it's like heart-stopping stuff.

"I'm very surprised to see them there. I'm amazed and it's marvellous and good on them."

Madrid struggled domestically, finishing third and 17 points adrift of LaLiga winners Barcelona, however Zinedine Zidane's men are only one win away from a third successive Champions League crown and 13th in total.

Johnston conceded Liverpool face a difficult task against the European masters but the Australian insisted the high-octane Reds are more than capable of stopping Cristiano Ronaldo and the defending champions in a "goal-fest".

The boss on the collective strength our players and supporters generated at Anfield during our run to the : May 23, 2018

"I think there's no doubt given the amount of medals Madrid have won and their history in the tournament, that is an enormous benefit to them," the 57-year-old added.

"Just looking through the stats and the medals the current squad have won, like 40 and Liverpool? Zero. So in the squad, you have 40 cup winners' medals compared to none. What a marvellous gap in experience of winning titles like this.

"Then you see the stat that Zidane has won his last six finals and Klopp has lost his five. So you say oh my goodness, on experience there is only one team in this. Then you think of Liverpool on fire and you think if anyone can beat them. As Klopp said, they will be on fire. I think he has read the tea leaves. That's what they will have to be to beat this very accomplished and experienced European Cup-winning giant."

Johnston continued: "It's absolutely critical [to stop Ronaldo] like if you're Madrid you'll say it's critical to nullify [Mohamed] Salah… then there's [Sadio] Mane and [Roberto] Firmino.

"They are both very attack-minded teams. Given the history of both teams, it could be a real goal-fest like 4-3 or 5-4. They're both vulnerable at the back."