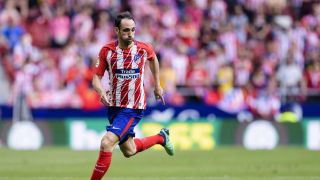 Juanfran has signed a one-year contract renewal with Atletico Madrid which ensures he will represent the club for a ninth LaLiga season.

The 33-year-old right-back joined Atletico in January 2011 from Osasuna, becoming a crucial part of Diego Simeone's side during an extended period of success.

Juanfran was a key part of the side that won LaLiga in 2013-14, Atletico's first top-flight crown since 1996, and has also celebrated two Europa League triumphs with the club.

Having played a total of 325 games for Atletico, Juanfran spoke of his delight at the renewal.

Our fullback will stay one more season as a 'rojiblanco' player June 22, 2018

"To continue one more year fills me with pride and happiness," he said.

"Renewing one more year with the team of my life fills me with enthusiasm. My commitment and loyalty to this club make my heart just think about being a rojiblanco player.

"I just can't wait for next season to start to continue giving the maximum in each match."

Capped 22 times by Spain, Juanfran was part of the squad that won Euro 2012 but was not selected for the World Cup in Russia.