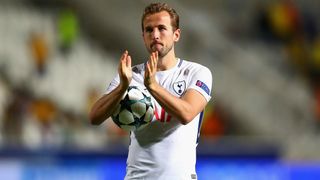 Harry Kane says Tottenham must go to Real Madrid believing they can get a result in next month's Champions League showdown.

Holders Madrid sit top of Group H following their 3-1 win over Borussia Dortmund in Germany on Tuesday but Spurs are level with them on six points, having beaten APOEL 3-0.

Kane scored all three of his side's goals in Cyprus – his sixth hat-trick in 2017 – to take his tally to nine in all competitions this season.

The England international is already looking forward to facing Zinedine Zidane's side at the Santiago Bernabeu and says Spurs should not be afraid of the Spanish champions.

"The win puts us in a great spot but it's by no means over," he told Spurs' official website. "We've got some tough games coming up, Madrid the next one and we have to go there with the same confidence and try to get a result. I'm looking forward to it."

Spurs' win came despite a spirited performance from the home side, who fired in 15 shots and hit the crossbar through Igor de Camargo with the scores still at 0-0.

"When you come away in the Champions League, it's always going to be difficult," said Kane. "They came out strong, had the fans on their side, hit the bar and had chances.

"The first goal is always vital, especially in away games and it was great to get that just before half-time. After that, we were just more clinical in the vital areas and once we got the second and third, it killed them off."

Midfielder Moussa Sissoko set up Kane's second of the match to continue his encouraging form in the early weeks of the season.

The France international struggled to make an impact last term following his move from Newcastle United but he feels a full pre-season under Mauricio Pochettino has helped this year.

"Since the beginning of the season, I'm playing a lot and I'm happy," he said. "I had a good pre-season so that has made a difference.

"Then when you play, you get more confidence game by game and it's easier to play with these players. I'm very happy at the moment and I hope to improve more.

"It's a great moment for me and I want it to keep going like that. I will try to do more and more every game. The season is still long and I need to stay focused, train hard and to give everything."