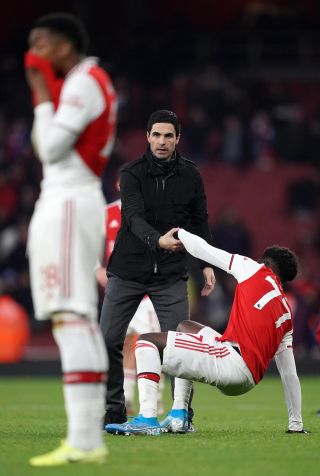 Arsenal manager Mikel Arteta insists he is pleased with the progress being made by some of the younger members of his squad.

The Gunners have struggled in the league this season and currently sit in 10th place having drawn their last four top-flight matches.

Bukayo Saka is one of the players who has impressed this season, but the 18-year-old is already in the final 18 months of his current contract.

Asked whether longer deals would be awarded to the likes of Saka, Arteta said: “I’m really happy how they are developing, part of that developing is to improve their contract and tie them to the club, but that has to follow a natural process.

“We have Raul (Sanllehi), we have Edu, Vinai (Venkatesham) and Huss (Fahmy) who are in charge of that and I’m sure we will do the right thing when players deserve improved contracts.”

Arteta could call upon his youngsters again as his side host Newcastle on Sunday, as the club continue to be without new signings Cedric Soares and Pablo Mari.

The Gunners have also been without Kieran Tierney since December, but the manager said the 22-year-old was making good progress.

The left-back has not returned to contact training, due to the nature of his shoulder injury, but has impressed the boss with his attitude.

Arteta said: “He’s making very good progress but we need to wait for the bone and the attachment with the tendon to heal before we can make contact.

“He’s been training, his work ethic is incredible, I’ve been really impressed with him so hopefully we can get him soon but we need to be careful and a little bit patient with him as well.”

Arsenal are level on points with the Magpies and go into the game with just one league win this year, over Manchester United on New Year’s Day.

Asked whether Newcastle fans should be pleased with their manager this season, Arteta said: “I believe they are and what Steve (Bruce) has brought to the club has been really good.

“The performances and results compared to where they were last year and the expectation they had, I think they are above any expectation.

“I think he’s put together a team with great spirit and he’s a manager with a massive experience.”