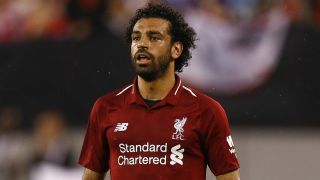 Jurgen Klopp insisted Mohamed Salah has no shoulder problems as he praised the Liverpool star following his goalscoring return against Manchester City.

Salah made his Liverpool comeback in Wednesday's last-gasp 2-1 victory over City at the International Champions Cup in New Jersey.

The Egypt forward's World Cup was hampered by a shoulder injury suffered in Liverpool's Champions League final defeat to Real Madrid in May.

However, Salah – the reigning Premier League Golden Boot winner and Player of the Year – showed no signs of discomfort after scoring within a minute of his introduction.

Salah came off the bench and cancelled out Leroy Sane's opener in the 63rd minute and he hit the crossbar shortly after, before Sadio Mane converted a penalty in the fourth minute of stoppage time.

Asked about Salah's return post-match, Liverpool manager Klopp told reporters: "I said before the game, it's not that he has problems – he has no problems. He only needs to get used to all the different things.

"We do a lot with the shoulder to strengthen the muscles and all that stuff. Usually you don't do anything with the shoulder but in rehab you feel this and feel that, and you need to learn that's normal. He is in that moment but he has absolutely no issues, I was not concerned about it otherwise he wouldn't have played.

"He came in and scored after pretty much 35 seconds. He had a big impact together with Sadio and Dom [Solanke], and the midfield with Marko [Grujic], Pedro [Chirivella] and Ben [Woodburn] played fantastic.

"Both full-backs were then really involved in the offensive situations, which we didn't have too much in the first half. Both centre-halves were there. Nat Phillips on this level is surprised by himself, that’s really cool; Raggy did well; and Caoimhin [Kelleher] had a nice save.

"So it was really a nice second half which helped us a lot because we all see it's still there, it's all good. We only need to keep on working and make sure that in two weeks we have fresher legs than tonight."

The first half was a dour affair but the ICC clash came to life after the break following the introductions of Salah and Mane as Liverpool bounced back from their 3-1 loss to Borussia Dortmund.

"I'm pretty sure Pep [Guardiola] was a little bit angry because he doesn't like, or he hates [losing], like I do," Klopp added. "I was not a bit happy about the Dortmund game, even when there was a lot more good situations than today, especially in the first half.