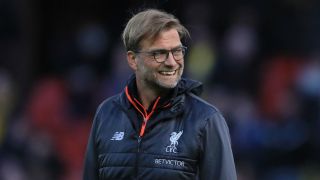 Jurgen Klopp is remaining patient in his pursuit of transfer targets for next season and concedes Liverpool qualifying for the Champions League will have an impact on their dealings in the market.

The Reds are locked in a tight tussle with Manchester City, Arsenal and Manchester United to finish in the top four and have just two matches to play this season against West Ham and Middlesbrough.

Klopp is already thinking ahead to next term, though, with Liverpool in discussions with players over possible moves to Anfield.

However, the German accepts several of Liverpool's targets are also in talks with other interested parties.

"The players we are talking to, I know they have offers from other clubs. It's important for the club," he said.

"There's a lot of money in the Champions League, as a football club we have to do this.

"Getting in the Champions League has [an influence]. [But] should I go to the players in the dressing room and say, 'boys, the better you play the better the players that replace you next year are'?"

Liverpool make the trip to London Stadium on Sunday with Klopp monitoring the condition of Roberto Firmino and Lucas Leiva (both muscle injuries).

However, Adam Lallana and Daniel Sturridge, who both came off the bench against Southampton, should be fit for selection.

It has been another frustrating campaign in terms of injuries for Sturridge, whose long-term future at Anfield remains in doubt, but Klopp says the England striker is ready to feature.

"How it looked [in training], he's ready," Klopp added.

"But it was difficult. Can you start a player and think about 40 minutes and then change."