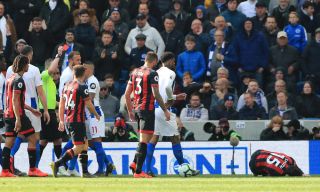 Chris Hughton admitted Brighton self-destructed as they crashed to their heaviest defeat at the Amex Stadium.

The shambolic Seagulls were thumped 5-0 by Bournemouth and had Anthony Knockaert sent off for a senseless, reckless challenge early in the second half.

BBC pundit Dion Dublin branded Knockaert’s late chop on Adam Smith “disgusting” and claimed it “could have been a career-ending tackle”.

“What I will accept is it’s a reckless, emotional challenge. When things are not going well as a team you have to deal with it, we didn’t and certainly Anthony didn’t.

“He is aware that he let the team down and that it was a bad challenge.”

Brighton were already 2-0 down when Knockaert’s red mist descended thanks to goals either side of half-time from Dan Gosling and Ryan Fraser.

David Brooks, Callum Wilson and Junior Stanislas then also got in on the act to leave Brighton facing a relegation six-pointer on Tuesday night at home against Cardiff, who could cut the gap to just two points with a win.

“We have no choice, we have a game on Tuesday and everyone will be looking for a reaction,” added Hughton.

“There’s not one player in that changing room who hasn’t been through a bad defeat, an embarrassing defeat, a humiliating defeat, whatever you want to call it, and had to go again.

“That’s the nature of the game. It’s our worst overall performance and we have no choice but to be better.”

For Bournemouth, only a second win in 10 matches finally saw them break through the 40-point barrier.

“It has been a difficult run for us recently, so we knew the importance of this game, we were desperate to win,” said manager Eddie Howe.

“It has been a frustrating second half of the season. We started so well that we felt we could really go on and achieve special things and it hasn’t really materialised.

“Our squad has been really stretched with injuries, we’ve missed some key players and that has halted our progress really.

“But we have come through it and got above the 40-point mark. It’s a nice place to be.

“Some of our build-up play was trademark us, the style of play returned. It was great to see Dan Gosling score after a long period without a goal and then in the second half we gelled and linked really well around the box and showed real quality.

“I’ll enjoy watching those goals back.”