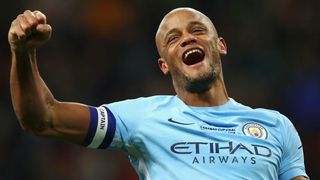 Vincent Kompany has called on his Manchester City team-mates to maintain their motivation next season as they seek to mount an improved challenge for Champions League glory.

City have marched to the Premier League title in impressive fashion during Pep Guardiola's second season in charge, but they fell short in Europe yet again, bowing out in the quarter-finals at the hands of domestic rivals Liverpool.

The team's best finish in the competition remains a semi-final appearance in 2015-16, when they lost to eventual winners Real Madrid, and the Belgium international is desperate for City to make progress on the biggest stage of all.

"The Champions League is a different discussion," he told the Guardian when reflecting on City's achievements this season.

"There has been a pattern, a historic one. Not even Pep, nor I, have been able to do anything about it. We didn't lose to any European team that have shown they are better than us, we drew a Premier League team at Anfield which have been traditionally very difficult for Manchester City.

"We have a history with them, we had a great chance to turn it, and we were not able to do it. Next year… [It] will happen."

City are 16 points clear of second-placed Manchester United and claimed the title with five matches to spare, a joint-record in the Premier League era.

"We keep having goals in front of us," he said.

"My dream for next season is to come back and see a lot of guys hungry, having that desire to be better, and beat whatever we have achieved this season.

"Staying there is a lot harder. Because you have to fight human nature. Once you achieve a goal and you are on that high, you have to consciously pull yourself in to say: 'I need to have the same hunger and desire as when I had nothing.'

"That's the hardest thing to do in life. That is getting challenged every single day once you win titles."