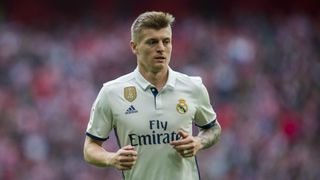 Toni Kroos has revealed Bayern Munich's refusal to match his wage demands was one of the principal reasons behind his decision to leave the club for Real Madrid.

The Bundesliga giants were keen to hold on to Kroos, but eventually opted to cash in on him in 2014 one year before the end of his contract after he refused to sign a renewal.

Kroos has admitted that he initially intended to stay at the Allianz Arena, but says he has no regrets over his switch to the Santiago Bernabeu.

"But when I look back at the whole situation, I am quite happy that we did not reach an agreement. I initially wanted to stay when we started talks, but we did not only disagree about the financial side of things in the end.

"After talks came to an end, it was a good time for me decide that I wanted a new challenge.

"After three years at Real Madrid, it is fair to say that I made the right decision and that I am very satisfied with how things went."

The 27-year-old will be seeking a hat-trick of Champions League titles when Madrid face Juventus on Saturday, having also won the tournament with Bayern.