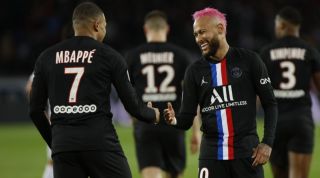 Paris Saint-Germain are getting ready to make Kylian Mbappe the best paid player at the club to ward off interest from Real Madrid, reports the Mirror.

PSG are prepared to offer Mbappe a bumper new contract worth £41m-a-year. This would take his weekly earnings from £375,000 currently to in excess of £750,000. In the process it would also make Mbappe better paid than Neymar, who is the biggest earner at the Parc des Princes as things stand with wages of around £600,000-a-week.

It would also see the France international earning in the region of what Lionel Messi and Cristiano Ronaldo pick up at Barcelona and Juventus respectively.

The Ligue 1 Champions are prepared to sanction this deal as Madrid plot to make their move for Mbappe. Los Blancos president, Florentino Perez, was planning to swoop for the 21-year-old in the summer of 2021 - when the forward would only have 12 months remaining on his contract.

They pulled a similar trick when signing Eden Hazard from Chelsea last year.

However, PSG are hoping to scupper those plans by tying Mbappe down to this mammoth new contract.

Rumours of the striker's departure from the French capital increased recently after he was seen having an angry conversation with manager Thomas Tuchel. Mbappe was annoyed at being substituted during the 5-0 win over Montpellier and the pair had a spat at the side of the pitch.

Yet PSG sporting director, Leonardo, says there is no issue between the attacker and Tuchel.