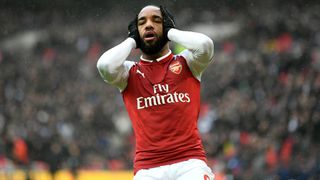 Alexandre Lacazette is set to be out for between four and six weeks after having knee surgery, Arsenal have revealed.

The France international underwent an arthroscopy on his left knee on Tuesday, with the Gunners understanding the minor operation to have been "a success".

But the injury comes at a crucial juncture for Arsenal, who have important fixtures in the Europa League, Premier League and EFL Cup all on the horizon.

Lacazette could miss a total of seven games across all competitions if he is ultimately out for six weeks.

Among those fixtures are the two Europa League last-32 contests with Ostersunds, plus a Manchester City double-header in the EFL Cup final and league.

It is also likely he will be unable to feature in France's next two international friendlies against Colombia and Russia on March 23 and 27, respectively, as Didier Deschamps intensifies his preparation for the upcoming World Cup.

The injury has come at a particularly inopportune moment for Lacazette and Arsenal, as Pierre-Emerick Aubameyang's ineligibility in the Europa League meant the former Lyon man was likely to lead the line against Ostersunds.

The two-legged affair against the Swedish side would have represented a fine chance to rediscover his touch in front of goal, having been demoted to second-choice since Aubameyang's arrival and scoring just twice in all competitions since the start of December.

But he could now be out of action for Arsenal until the start of April.