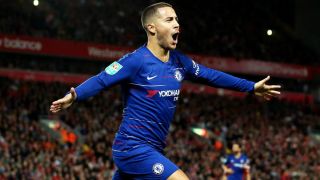 Frank Lampard thinks Eden Hazard's form makes him the best player in the world at present and hopes the Chelsea star decides to rest against Derby County on Wednesday.

Hazard scored eight goals in 11 appearances in all competitions for Maurizio Sarri's side before sitting out the wins over BATE Borisov and Burnley last week with a back problem.

Lampard visits his old club in the EFL Cup this week, looking to produce another shock following the penalty shoot-out win over Manchester United in the last round.

And the former England midfielder admits he would welcome the news that Hazard decided not to play against his side.

"On current form, I think he is," Lampard told a news conference when asked if he thinks Hazard is the world's finest. "Of course, that can change, but I love watching him and he's in his prime.

"He is an absolutely outstanding player in world football. Let's hope he wants a rest! I think he's scared of coming up against my team!"

5 - Eden Hazard scored five goals in September 2018; his best ever tally of goals in a single month of Premier League action. Class. 12 October 2018

Chelsea's unbeaten start to the season has seen them emerge as contenders for the Premier League title, alongside champions Manchester City and Jurgen Klopp's Liverpool, and Lampard has been impressed by Sarri's impact.

"They have been very impressive. Sarri is very impressive," he said. "We've worked hard here to change certain things, and I know how much work goes into it. He's done the same at Chelsea, and I see them in the mix of teams in with a shout of winning the title."

The Rams boss also spoke of his shock at the news of former England and Chelsea star Glenn Hoddle, who was hospitalised over the weekend after a heart attack.

"It was a huge shock," he said. "I grew up idolising him as a player. I've been fortunate enough to work with him in the media. His knowledge and willingness to give you help took me back.

"I love Glenn Hoddle as player and a man. Fingers crossed, he's getting a bit better. Let's hope he'll be fine."

And there was sympathy from Lampard to those affected by the helicopter crash at Leicester City's King Power Stadium on Saturday, which killed all five people on board, including club chairman Vichai Srivaddhanaprabha.

"It's devastating news and myself and everyone at Derby pass on thoughts and condolences to everybody involved, and club as a whole," he said.

"[Leicester winning the league] was an incredible story and I've been reading comments from everyone speaking so highly of the man. We support Leicester, their fans and families involved. [It was] a very sad weekend."