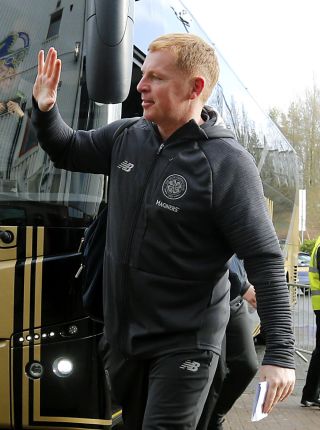 Neil Lennon wants Celtic’s bandwagon to roll seamlessly from cup to league with the visit of Hearts on Wednesday.

The William Hill Scottish Cup holders booked a quarter-final spot – and a date with St Johnstone in Perth – with a 3-0 fifth-round victory over League One outfit Clyde at Broadwood Stadium on Sunday.

It was Celtic’s 33rd successive domestic cup-tie win but Lennon quickly refocused on the Ladbrokes Premiership where he is looking for the champions to at least maintain their seven-point lead over Old Firm rivals Rangers at the top of the table when the Gorgie side come calling.

He told CelticTV: “It (33) is incredible. Great consistency from the players.

“We were clear favourites so we made sure there were no mistakes and now we keep rolling on.

“It was comfortable, we used the squad as well so it was a good day all round.

“Back to league business and a home game.

“We have a heavy schedule of games so it was good to use the squad.

The Northern Irishman made six changes to his side to give a rest to star players such as Fraser Forster, Callum McGregor and Odsonne Edouard, and the visitors took care of business with minimum fuss.

Lennon praised French midfielder Olivier Ntcham, who scored the opener with a drive from outside the box, and substitute Vakoun Bayo, who netted a late third from a Moritz Bauer pass, with skipper Scott Brown scoring just before the break.

The Parkhead manager said: “It was a great goal. Olivier is in great form, he is playing brilliantly.

“It was a great finish and he can do more of that. So I am delighted with his contribution at the moment.

“Bayo’s was a nice finish, a nice goal.

“He missed a couple of chances earlier on but it was a nice way to wrap the game up.

“We deserved another goal out of it at least.”