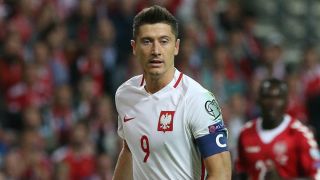 Robert Lewandowski etched his name into Poland's record books by becoming his country's all-time leading goalscorer in a World Cup qualifier against Armenia.

The Bayern Munich striker headed into the Group E contest one goal shy of Wlodzimierz Lubanski's tally of 48.

After Kamil Grosicki had fired Poland ahead in Yerevan, Lewandowski matched the haul of his now 70-year-old compatriot with a sublime 18th-minute free-kick.

Lewandowski, who scored his first international goal on debut against San Marino in 2008, then claimed the landmark for his own after lashing home from an in-direct free-kick inside the area 10 minutes later.

Poland will qualify for Russia 2018 with a win if Montenegro versus Denmark ends in a draw, while three points will guarantee a play-off berth at a minimum.