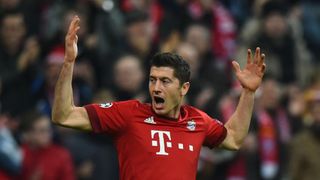 Robert Lewandowski's agent has laughed off Bayern Munich's interest in Gonzalo Higuain by claiming "those who have a beautiful bride should not look at other beautiful brides".

Argentina international Higuain has been in stunning form for Serie A table-toppers Napoli and leads the Serie A scoring charts with 18 goals - with next best Eder only on 11.

His form led to Bayern chief executive Karl-Heinz Rummenigge stating earlier this week: "Clearly Higuain is a player we like, he is doing very well.

"Despite that, I doubt my friend Aurelio De Laurentiis [Napoli president] will sell."

Lewandowski has been equally prolific for runaway Bundesliga leaders Bayern, scoring 23 goals in 26 games in all competitions for Pep Guardiola's all-conquering side.

And his agent Maik Barthel does not believe the club should be looking elsewhere when they have a player of Lewandowski's calibre in their squad.

Lewandowski has been linked with a move to Real Madrid in recent months although that could now be complicated by the Spanish side being banned by FIFA from registering new players in the next two complete windows.