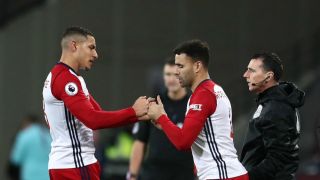 Jake Livermore's confrontation with a West Ham supporter during Tuesday's Premier League game followed a comment about the death of the midfielder's infant son, West Brom have confirmed.

After being substituted in the second half of West Ham's 2-1 win at London Stadium, Livermore appeared to react angrily to a fan close to the West Brom dugout and was led away.

Alan Pardew said after the game that West Brom would investigate the incident and the club released a statement on Wednesday defending the actions of the England international.

"Following his substitution in the second half, Jake was subjected to general abuse from home supporters which he shrugged off," the club statement said.

"However, he acknowledges that he moved to confront one spectator who chose to make a comment about the death of his infant son.

"The club would like to think that all right-minded football supporters could understand this reaction which did not result in any physical exchanges before Jake was led away to our dressing room.

"Jake is an outstanding young individual who has the total support of everyone at the club and he has made it clear he considers this statement to be an end to an unhappy incident.

"Albion were very appreciative of the swift response by the officials of West Ham in dealing with this matter and are more than happy to leave any further action they deem appropriate in their hands.

"The club has responded to an FA request to offer our observations of the incident and will not be making any further comment."

Omnisport contacted West Ham for comment on the incident and are yet to receive a response.