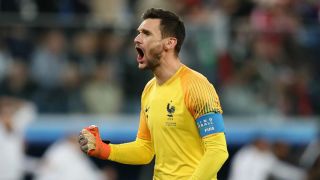 Hugo Lloris says there will be no repeat of any complacency shown by France at Euro 2016 when they face Croatia in the World Cup final on Sunday.

Paul Pogba suggested Les Bleus almost took beating Portugal in the final on home soil for granted after seeing off world champions Germany in the last four, only for Eder to snatch a surprise 1-0 win for Fernando Santos' side.

But Lloris has vowed there will be no such arrogance in the showdown with Zlatko Dalic's Croatia in Moscow, even though he does not think all the players truly expected to beat Portugal.

"No, I don't think it'll happen again," he told a news conference at Luzhniki Stadium. "The Euros was new for many players. In the Velodrome against the world champions, we had this communion with the public but beyond that I don't think we saw it in such a way [that we were destined to win the final].

"Even though we had followed the euphoria [at home], we didn't do that after Belgium [in the semi-final]. We know what we've gone through and we want to give the best opportunity to the team to win this final. That's the aim and that's the mentality we've been using while preparing for this game."

France saw off Argentina, Uruguay and Belgium in 90 minutes to reach the final in Russia, while Croatia had to come from a goal down and survive extra time in all three of their matches in the knockout rounds.

Hey, ! Is there a special prize for providing the total of   matches instead of , considering the amount of extra-time played?  July 14, 2018

However, far from seeing Croatia's extra workload as benefiting France, Lloris thinks it will only have strengthened their opponents' desire to win.

"Croatia have shown their moral values, which are quite incredible," he said. "They've shown that throughout the tournament, they've gone through after extra time three times in a row, which shows there is something special in the team.

"The players have great individual talent, but they have incredible collective strength. We have a lot of respect for the team and we're going to have to play a perfect match to win."

The Tottenham goalkeeper does not think nerves will pose a problem for his own team, though, as they aim to win the World Cup for a second time.

"I think our team is quite calm," he added. "Since the beginning of the tournament, I don't know if we realise how far we've come, but it's better that way.

"The words from the coach and president are important as well, the management team have given us the best possible conditions, but we have this inner strength that's been inside us since the beginning, to face any challenge.

"It will be the most important match of our careers, we'll be ready physically and mentally. It'll be a special match, it's a World Cup final, we have to stay in our bubble and focus on the ultimate goal."