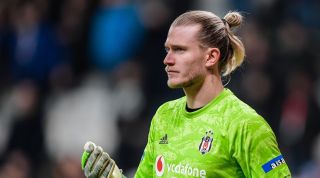 Loris Karius' loan spell at Besiktas is under threat after some poor recent displays, according to reports.

The Liverpool goalkeeper joined the Turkish outfit on a two-year loan deal in summer 2018.

Jurgen Klopp had lost faith in his compatriot after Karius made two fatal errors in the Champions League final against Real Madrid earlier that year.

The former Mainz man made 35 appearances in all competitions for Besiktas last term, and has played 26 games so far in 2019/20.

However, Fotospor report that manager Sergen Yalcin, who only took charge at Vodafone Park last month, is already losing faith in the shot-stopper.

Karius was at fault for the goal Besiktas conceded in a 2-1 victory over Caykur Rizespor at the weekend.

That is not the first time the 26-year-old has been guilty of a costly error this season, and Yalcin has not been overly impressed with what he has seen from the goalkeeper so far.

There are also concerns that Karius has grown too fond of the Istanbul nightlife, leading to a drop-off in his performance levels.

Karius may have expected his loan move to be made permanent this summer, but Besiktas - who are currently seventh in the Super Lig standings, are now having a rethink.

The club have identified Basaksehir’s Volkan Babacan and Caykur Rizespor’s Gokhan Akkan as potential transfer targets as they set about replacing Karius at the end of the campaign.

That leaves the German's future in doubt, with Alisson Becker now firmly established as the No.1 at Anfield.

Karius' Liverpool contract runs until 2021 but it is not clear whether Klopp would be happy to have him as the Reds' second-choice goalkeeper next term.

Adrian has done a good job of deputising for Alisson this season following his switch from West Ham last summer.

That means Karius could be on the lookout for a new club ahead of the 2020/21 campaign.