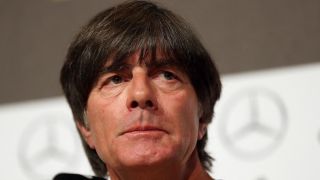 Joachim Low has defended his squad for the upcoming Confederations Cup in Russia, insisting his star names needed to rest ahead of the 2018 World Cup.

Reigning world champions Germany have omitted Toni Kroos, Thomas Muller and Mesut Ozil, as well as Jerome Boateng, Mario Gomez and Mats Hummels, from their selection for the tournament which starts on June 17.

"The heart of a football fan bleeds when the reigning World Cup winner plays without stars," Sorokin said. "They are the reason the fans attend matches. But we need to accept it."

Low is planning to experiment at the tournament by giving opportunities to young players, although he acknowledged Sorokin's position on the matter.

"Those players who played so many games reach their limit at some point," Low said on Friday. "I can understand the hosts in Russia and that they have different expectations. But they will see the stars next summer.

Germany are already close to qualifying for the 2018 World Cup having won their first five qualifying matches in Group C ahead of Saturday's home game against minnows San Marino.

Low confirmed he has amended his usual plans for the match due to the low standard of opposition, while giving some clues for his team selection.

"We will not be preparing the team as intensely for the match against San Marino," Low said. "My focus will be on how we shape this game. All respect to San Marino but it is about how we control the game, not how they play.

"We will be working on our runs, doing different things going forward. We want to push San Marino back, play offensively and score goals. But next week, we will have to concentrate on different things since we will be playing at a completely different level at the Confederations Cup.

"Julian Draxler completed a small training session without any problems and he is expected to train with the rest of the team later today [Friday]. If he is also able to do that without any problems, then he will also be in the starting XI and the captain.

"If some problems do arise, though, then we will not be taking any risks. Shkodran Mustafi is available. We left him out on Tuesday [against Denmark] as a precaution following his concussion. If Draxler does not play, he will be the captain."