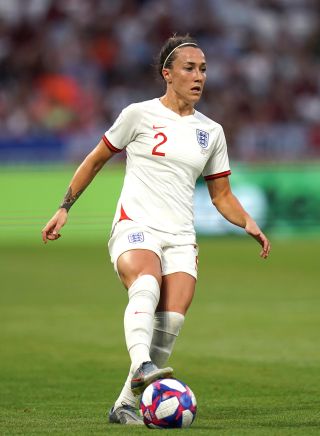 Lucy Bronze admits she is returning to Manchester City with a sense of unfinished business.

Both Bronze and fellow England full-back Alex Greenwood joined the club this week after leaving Lyon at the end of their contracts.

Bronze helped City win the Women’s Super League, the FA Cup and the League Cup before departing in 2017 for Lyon, where her subsequent trophy haul included three Champions League titles.

Asked if she had unfinished business with City, Bronze said: “Yes, I guess so.

“I’ve won all the domestic trophies with City, reached the semi-finals of the Champions League also, but I want to get the club to the final, to win more silverware, push the team on and the young kids up and just improve the team in general.”

City’s best run in the European competition has been to the semi-finals, in Bronze’s final year with them and again the following season, with both ending in defeat to Lyon, the champions for the last five seasons.

The 2019-20 WSL campaign, ended prematurely due to the coronavirus pandemic, saw Chelsea take the title on a points-per-game basis with City second.

Since then, in addition to Bronze and Greenwood, City have also signed another England international, Chloe Kelly, and two World Cup winners in American pair Sam Mewis and Rose Lavelle.

“I can definitely see the team (City) has gone up a level now compared to three years ago when I left,” Bronze said.

“Looking at all the signings that have come to the WSL, I’m feeling very fortunate to move back now. I definitely would have been a bit sad if I’d missed out on playing this season when there are so many stars in so many different teams now.”

Bronze says she had been thinking about a return to England since early in the year and stressed that if she was to do so “it was only ever going to be City.”

She added: “Although there was other interest, I just said ‘I don’t want to speak to you’.”

Bronze says thoughts of the England team were a factor in her return.

“Especially with everything that is going on, with changing managers and so many competitions coming up, it just feels right to be in England, to help the team, to be there for important things,” she said.

Earlier this year it was announced Lionesses boss Phil Neville would not be staying in the role beyond the end of his contract in July 2021, and then that Holland boss Sarina Wiegman will succeed him, starting work from next September.

Next year includes the delayed Tokyo Olympics, then England will compete in a rescheduled home Euros in 2022, and the next World Cup take place in 2023.

Greenwood – who like Bronze has featured for England at their last three major tournaments, all of which saw them reach the semi-finals – was at Lyon for one season, having previously captained Manchester United.

While the 27-year-old says the season in France was “probably the best year of my football career in terms of on the pitch and off the pitch”, she described the decision to join City as “a no-brainer.”

Greenwood said: “It’s a massively ambitious club and it meets my ambitions as well. So it was a no-brainer really when it came to joining Man City.”