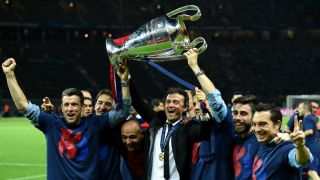 Luis Enrique announced he will leave Barcelona at the end of this season, bringing down the curtain on three years as head coach.

The first two seasons yielded eight trophies and there could be more to follow - successes or failure to add to these highs and lows.

Completing a clean sweep of domestic league and cup, rounded off with Champions League glory, put Luis Enrique in rarefied company at the end of the 2014-15 season. He became the eighth coach after Jock Stein, Stefan Kovacs, Guus Hiddink, Alex Ferguson, Pep Guardiola, Jose Mourinho and Jupp Heynckes to accomplish the feat.

The manner in which his swashbuckling Barca emulated the history-making exploits of Guardiola's 2008-09 vintage was truly something to behold. Their former boss, then in charge of Bayern Munich, was unable to shackle Lionel Messi, whose quickfire double – capped with a second of impudent brilliance – set up a 3-0 first-leg win in the Champions League semi-final.

Bayern had humbled Barca 7-0 on aggregate at the same stage two seasons earlier but could not overturn the deficit in Bavaria, and the air of sweet revenge continued in LaLiga. Atletico Madrid clinched the title at Camp Nou in 2013-14, but Barca did likewise at the Vicente Calderon to regain their crown with a game to spare.

That meant the focus could turn towards a 3-1 Copa del Rey final win over Athletic Bilbao, complete with a Messi solo goal for the ages, and victory by the same scoreline to sink Juventus in Berlin for the club's fifth European title.

Luis Enrique: Eight trophies in the bag and a possible three more to come March 1, 2017

BRILLIANCE AT THE BERNABEU

Barcelona might have had the last laugh by leaving Real Madrid trophyless in 2014-15, but a resounding 3-1 loss to their bitter rivals in October of that season threatened to quash Luis Enrique's tenure in its infancy. Ultimately, Carlo Ancelotti was the man to make way at the Bernabeu and the unpopularity of successor Rafael Benitez would never recover from a battering at the hands of bitter rivals Barca.

Luis Suarez and Neymar put daylight between the teams and, before the Uruguay star added his second, club stalwart Andres Iniesta picked out the top corner for a sumptuous third – a strike that would be the image of Barcelona's complete mastery and dominance of the old enemy at that time.

Having swept all before them in Luis Enrique's first season, Barcelona continued to add to their trophy collection in 2015-16. LaLiga and the Copa del Rey would be retained after a mid-season trip to Japan, where Barca were crowned World Champions. Suarez was to the fore as the lethal spearhead of an irrepressible attack, scoring a hat-trick in a 3-0 win against the over-matched Guangzhou Evergrande before joining Messi on the scoresheet with a brace in a 3-0 final triumph over River Plate.

Some of 's best moments as Barça's coach. We are sure there will be many more. Força Barça! Força Lucho! March 1, 2017

The glories to come in 2014-15 were scarcely credible when Barcelona slumped to a 1-0 loss against David Moyes' Real Sociedad at a rain-lashed Anoeta. Messi began Barca's first LaLiga match of 2015 on the bench and he could not affect a second-half turnaround. Reports of a rift between head coach and star player dominated the agenda in the aftermath. A belief in some quarters that player power rather than coaching intuition turned the tide over the subsequently joyous months is one that has continued to unfairly dog Luis Enrique.

Barcelona failed to beat Atletico over six attempts in the season before Luis Enrique took charge - a trend he emphatically overturned with seven straight wins. The last of those came by a dicey 2-1 margin in the 2015-16 Champions League quarter-final first leg and Barca would pay for leaving the door ajar. Antoine Griezmann's brace capped a 2-0 win as Diego Simeone's side located their familiar discipline and intensity to fine effect. That defeat came in the midst of three consecutive LaLiga reverses, turning a procession to the title into an unexpected slog. Even though Barcelona held out to lift the double once more, their untouchable brilliance of 2015 has not returned.

There was little love sent in Barcelona's direction by a thrillingly rampant Paris Saint-Germain last month as Unai Emery's men dealt out a Champions League humiliation of epic proportions. Angel Di Maria scored a brilliant free-kick and an even better second, with Julian Draxler and the prolific Edinson Cavani also getting in on the act. It is no exaggeration to claim goalkeeper Marc Andre ter Stegen was Barca's most effective player at the Parc des Princes. An inevitable and lengthy media inquest into the loss featured questions over Luis Enrique's tactical acumen and the coach was whistled during a dour 2-1 LaLiga win over Leganes next time out. It was a lot to hang over a coach with fewer than five months left on his contract and, although some unexpected tactical innovations saw off Atletico and Sporting Gijon, that chastening night in Paris will be remembered for pushing Luis Enrique decisively towards the exit door.