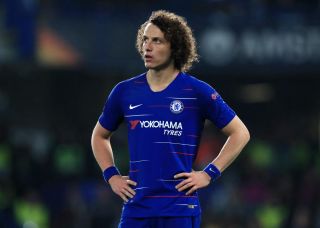 David Luiz expects to tie up a new Chelsea contract in the coming days.

The Brazil defender’s current Blues deal expires at the end of the season, with the 32-year-old having been in protracted talks with the club over an extension.

But the centre back then blasted home emphatically from the spot with Eden Hazard firing the decisive penalty to book Chelsea’s Europa League final showdown with Arsenal.

And after helping Maurizio Sarri’s men inch into that May 29 all-English clash in Baku, Luiz revealed he is close to finalising new Stamford Bridge terms.

Asked if he will be at Chelsea next season, Luiz said: “Yes I think so. Soon everybody is going to know. It will be before the Europa League final, in five days.

“I love this club. My great moments in football were here, especially the European titles – the Champions League and Europa League.

“My relation with the fans has always been great since the first day I played here. I just try to do my best and make them happy.

“Nobody wants to play in an empty stadium when you have an opportunity to understand that we play for them.”

Chelsea’s 4-3 penalties victory over Eintracht capped a turbulent night where boss Sarri was booed by home supporters, almost sent to the stands – and then refused to join the players’ huddle just before the shoot-out due to personal superstitions.

The Blues have already secured Champions League qualification for next term courtesy of cementing a top-four Premier League finish, and could yet add the Europa League silverware.

Asked why Sarri stayed off the pitch before the penalties, Luiz said: “He has his superstitions, my friend, it’s crazy.

“I’ve seen it a lot. Players have superstitions, managers have them too. I don’t, I believe in God.

“I think during the season we have had different periods. I remember in the first three months, people were so excited with us.

“They were saying ‘everyone has understood it so quickly, oh Sarri-ball, everyone is playing well, now we can see Chelsea with the possession blah, blah, blah’.

“After that, it changed to ‘nobody knows anything, Chelsea are not good enough’.

“I think this is normal in the first season of a coach.

“We have done our best throughout the season. Nobody bet that we would go to the last game of the Premier League having already qualified for the Champions League.

“We can finish in the top three, not just the top four.

“Remember, we were at one stage 11 or 12 points behind Tottenham and now we are there.

“It is not about how you start. It’s not about the beginning, it’s how you end.

“The end can be great for all of the top four now or for just some teams. Football is about this.

“I think the fans already have a good connection with him (Sarri). Of course, the fans want to go to Baku to celebrate. It’s a final and we will try our best to win.”

England has become the first country to provide all four European finalists in the same season, and Luiz expects a stern examination against Arsenal.

Chelsea would deny Arsenal a Champions League place next term by beating the Gunners in Baku, with Luiz admitting that only adds extra motivation.

“It is going to be a difficult game, they have a great team and a great coach,” said Luiz.

“He (Unai Emery) knows how to win this competition. I worked with him a bit in Paris and I know how passionate he is.

“He knows how to play these kind of games. It is up to us to prepare well.

“We have to try to win the trophy. We know that if we win they will not be in the Champions League.

“This will be better for us because we put a fantastic team out of the Champions League.”