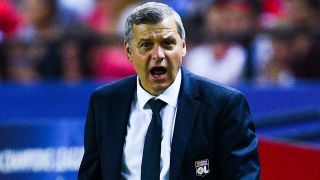 Lyon could face a ban from UEFA competition after being given a further disciplinary charge following the second leg of the Europa League semi-final against Ajax.

UEFA confirmed on Friday the Ligue 1 side have been charged with setting off fireworks, throwing objects, blocking stairways and a pitch invasion by supporters, which took place during Thursday's 3-1 win.

The repetition of three of those offences could now prompt a harsher sanction. UEFA's Control, Ethics and Disciplinary Body will meet on July 20 to deal with the case.

Ajax, who reached the final with a 5-4 aggregate win, have also been charged over "acts of damage" during Thursday's match.

Manchester United, who drew 1-1 with Celta Vigo at Old Trafford to progress 2-1 on aggregate, have been charged for the late kick-off of that match.

Defenders Eric Bailly and Facundo Roncaglia have also had their one-match bans confirmed following the respective red cards they received in the closing stages.