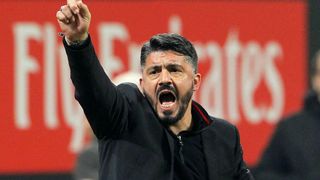 AC Milan great Paolo Maldini believes Gennaro Gattuso's work is beginning to have a positive impact at the club.

Gattuso replaced Vincenzo Montella as head coach in November and, after a rocky start, has managed three wins and a draw from the last four matches in all competitions.

Milan's improvement on the pitch comes amid more concern about their long-term stability, with the club falling out of the top 20 in the latest Deloitte Money League table after posting revenues of €191.7million for 2016-17.

Concerns of possible Financial Fair Play implications following last year's huge spend on the playing squad have also refused to die down, with a reported €195m spent in the previous transfer window following the €740m purchase of the club by a Chinese consortium in April last year.

Maldini admits it would be futile to demand a return to the Champions League this season under Gattuso, with Milan 12 points adrift of the top four after 21 matches, but he is confident old team-mate Gattuso's influence is already making its mark.

"Rino is transmitting his ideas of playing football, and his convictions," the former defender, a seven-time Serie A winner and five-time European champion with Milan, told La Gazzetta dello Sport.

"You can see that from the intensity of the training. He found himself in a tough situation but now it is beginning to bear fruit.

"Naturally, he needs time. He'll be assessed in terms of results but, clearly, he can't be asked to qualify for the Champions League. That was the goal at the start of the season but the reality proved to be different.

"Football is not just technical and tactical; it's also mentality, the ability to be part of a group, and sacrifice. Rino can convey the right values."

Milan resume league duties with a clash against high-flying Lazio at San Siro on Sunday.