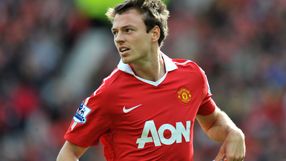 Evans sustained a hamstring injury during this month's 2-2 draw at West Ham United in the FA Cup.

"He's not 100 percent. Other than that, we're not too bad. We got a lot of players a game on Wednesday [in the FA Cup Third Round replay victory over West Ham] and I thought they did well. It was a good performance."

United are unbeaten in 11 league visits to White Hart Lane but will need no reminding of the fact they have already lost 3-2 to Spurs this season at Old Trafford in September.

"I think Spurs have done well this season," Ferguson said on Friday. "I've watched quite a few of their games and their form has been consistent. They're in good form and I think they'll challenge for the top four.

United have a seven-point lead over champions Manchester City at the top, with Spurs 15 points behind them in fourth place. Chelsea, who are two points ahead of Tottenham in third, host Arsenal in Sunday's other game.

Ferguson took time to look beyond immediate games to outline long-term plans for his absent midfielder Darren Fletcher who this week underwent surgery to resolve a bowel condition.

The manager said he expected the 28-year-old Scotland international to return in July and believed he would adapt his game to more of a holding role.

"He had to change his game and he hasn't been the Darren Fletcher of three or four years ago in the games this season. Instead, he was sitting in front of the back four and he did well. That could be his role in the future.

"When he comes back, and I hope he does, it will be in a different role."

Spurs have a long-term absentee of their own after announcing on Friday that midfielder Sandro would miss the rest of the season following knee surgery.

"It might be a bit too soon for William, we're assessing his return to squad training this week," manager Andre Villas-Boas told a news conference. "Younes is still out, but the rest of the squad is fine."