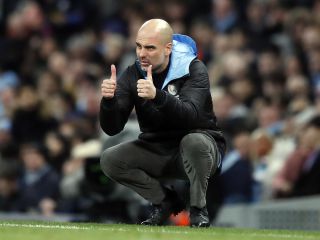 Manchester City were beaten on the night but held on for a 3-2 aggregate win over rivals Manchester United in their Carabao Cup semi-final.

Nemanja Matic scored the only goal of the second leg at the Etihad Stadium but was later sent off as City, the better team throughout the tie, prevailed overall.

That holders City did not add to the 3-1 lead they established in the first leg at Old Trafford was remarkable as they spurned numerous gilt-edged chances.

But David De Gea produced several outstanding saves to keep United in the tie and Matic gave them hope with a sweet strike 10 minutes before the break.

It was ultimately not enough but Ole Gunnar Solskjaer’s side did restore some pride after their humbling in the first leg.

United’s executive vice-chairman Ed Woodward was in attendance, showing his face in the light of fierce recent criticism and an attack on his home.

There was no concerted chanting towards Woodward but there were tensions between the two sets of fans with a missile appearing to be thrown from the United end towards home supporters at one point.

On the field, City were soon into their stride and United were thankful that De Gea was able to keep them at bay.

De Gea made a superb one-handed save to his right to deny Sergio Aguero as the Argentinian deftly headed an Ilkay Gundogan cross towards goal.

Moments later De Gea saved again, this time with his feet, from Riyad Mahrez and then clawed out another effort from Aguero that seemed destined for the top corner.

Kevin De Bruyne created another chance but shot over and Raheem Sterling raced into the area only be thwarted by a fine tackle from Harry Maguire.

Maguire turned to rally his team-mates after that challenge and moments later that paid off as United grabbed a shock lead.

Fred’s free-kick from the left skimmed off Bernardo Silva’s head and bounced towards Matic at the far post. The Serbian swivelled and struck a powerful left-foot half-volley that flew into the bottom corner.

With hopes revived and Matic imploring team-mates to get back and defend, United were energised.

Still, City looked the stronger and United had two let-offs just before the break.

Firstly an offside flag denied Sterling after he turned in from close range and then a poor Victor Lindelof backpass almost allowed Aguero in but De Gea cleared.

Sterling should have put City level on the night just before the hour as he raced clean through on goal from a De Bruyne pass but delayed his shot too long. That allowed defenders to retreat and Sterling ended up firing over as he checked his run and tried to go round De Gea.

Kyle Walker tried his luck from distance 19 minutes from time but De Gea was equal to his well-struck attempt.

United then had another escape as a Maguire clearance was deflected and fell straight to David Silva but Gundogan could not finish. Aguero then lashed wide as City again failed to kill off the game.

United were reduced to 10 men when Matic received a second yellow card for a tactical foul on Gundogan after 76 minutes.

The visitors did win a free-kick in a dangerous position late on but City – who saw a late Aguero effort ruled out for another offside – resisted further damage.