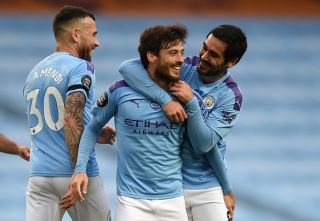 Manchester City got back among the goals as they thrashed Newcastle 5-0 in a one-sided Premier League encounter at the Etihad Stadium.

Stung by a surprise loss at Southampton on Sunday, Pep Guardiola’s side looked more like the team that hammered new champions Liverpool last week in another emphatic home performance.

Gabriel Jesus ended his barren run to begin the rout while Riyad Mahrez, David Silva and Raheem Sterling also got on the scoresheet along with a Federico Fernandez own goal.

City took full advantage of the injury woes which forced Newcastle boss Steve Bruce into six changes, tearing through the visitors almost at will.

The Magpies, without the dangerous Allan Saint-Maximin and with Miguel Almiron only fit enough for the bench, offered little in return.

The pattern of the game was set in the opening minutes as Mahrez cut in from the right and shot straight at Martin Dubravka.

It did not take long for the opener to come and Jesus will have been relieved to get it. After nine games without scoring and unfavourable comparisons to Sergio Aguero, the Brazilian was in need of a goal.

It was teed up nicely for him by Silva, who swept in a low cross from the left, and Jesus calmly tucked home.

Mahrez then tested Dubravka on the turn and Phil Foden shot across goal.

City’s second came after 21 minutes when they carved Newcastle open again. This time it was Mahrez who finished from in front of goal, turning home after Kevin De Bruyne reached the byline. It was De Bruyne’s 18th assist in the Premier League this season.

It was half an hour before Newcastle had a chance and even then Ederson dealt comfortably with Fernandez’s header.

City spurned a number of chances to increase their lead with Foden uncharacteristically guilty of a couple of bad misses. The 20-year-old went through on goal after a one-two with Jesus only to miss the target and then somehow put wide from three yards after being set up by De Bruyne.

It took a Newcastle intervention for City to claim their third just before the hour. Jesus was trying to work a shooting chance when Matt Ritchie nicked the ball from his feet. He attempted to clear behind but Fernandez got in the way and the ball deflected off him for an unfortunate own goal.

City’s fourth came soon after following a foul on substitute Sterling just outside the area. De Bruyne may have shown his devastating ability from that range in recent weeks but on this occasion he deferred to Silva.

The Spaniard, who is leaving the club at the end of the season, stepped up and clipped past Dubravka from 20 yards. He almost got another soon after but this time Dubravka palmed over his first-time shot.

City continued to stretch Newcastle and claimed a fifth in added time when they burst forward again and Silva played in Sterling for a simple finish.