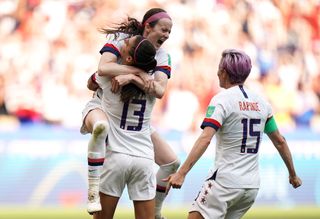 The 25-year-old midfielder moves to the Women’s Super League club from American outfit OL Reign, whom she had only joined from Washington Spirit earlier this week.

Lavelle is City’s third signing of the close season after the arrivals of USA team-mate Sam Mewis and England forward Chloe Kelly.

Lavelle said: “I’m looking forward to the opportunity of playing in England and competing in the Champions League.

“I’ve heard amazing things about the club and it just felt like a really good fit overall. I want to challenge myself and feel that Manchester City is the perfect environment to do so and, hopefully, I’ll find some success along the way.”

Washington agreed to trade Lavelle to the Reign, their National Women’s Soccer League rivals, in exchange for a favourable draft pick and on the understanding she subsequently signed to play outside the US. For their part, Reign will receive compensation and retain Lavelle’s playing rights should she ever return to the NWSL.

Lavelle has won 45 caps for the USA and scored in last year’s World Cup final victory over Holland.

She joins a City side that have finished runners-up in WSL for the last three seasons. The 2016 champions were top of the table when last season was curtailed in March due to the coronavirus pandemic but they dropped to second when the title was decided on a points-per-game basis.

City head coach Gareth Taylor said: “We’re thrilled to have secured Rose’s services – with her impressive back catalogue, she is an incredibly exciting player and one we’re all looking forward to working with.

“Her endless accolades for both club and country are proof of what a talent she is and she’s exactly the kind of player we want here at City, with her ambitions and desire for success matching our own.”